Colorectal cancer (CRC) is the second-highest cause of cancer-related deaths in the United States with over 50,000 estimated deaths in 2014. The advanced stages of colorectal cancer has a poor five-year survival rate of 10%, whereas the diagnosis in early stages of development has showed a more favorable five-year survival rate of 90%. Early diagnosis of colorectal cancer is achievable if colorectal polyps, a possible precursor to cancer, are detected and removed before developing into malignancy.The gold standard screening method for polyp detection and removal is optical colonoscopy. Colonoscopy has been a successful preventative procedure and has contributed to a significant decline of 30% in colorectal cancer.

A colonoscopic procedure takes about 25 minutes and consists of the following two phases:

1) Insertion phase during which a flexible endoscope (a flexible tube with a tiny video camera at the tip) is advanced via the anus and then gradually all the way to the end of the colon (Fig. 1).

2) Withdrawal phase that begins immedidately after the insertion phase, during which the endoscope is gradually withdrawn while colonoscopists meticulously examine the colon wall to find and remove polyps. 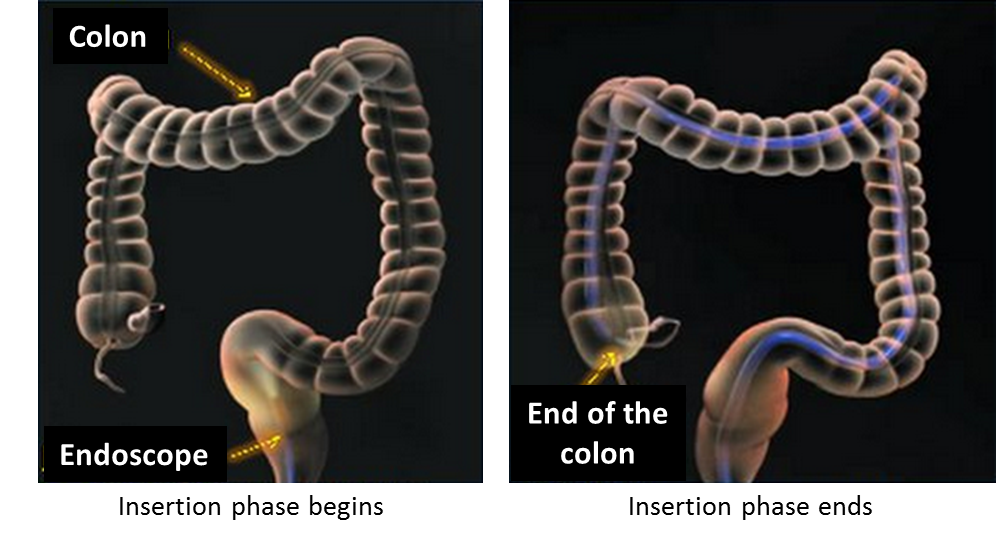 The physcal size of polyps differs from what appears in the videos. In fact, a polyp may appear in different scales depending on the distance between the polyps and the colonoscopy camera. This is shown in the Fig. 3 where the same polyp is seen in multiple scales.

Figure 3: Polyp apperance variation in a sequence of images. As seen, the polyp appears in different shades and size as the colonoscopy camera approaches to or distance from the polyp (from CVC-ClinicDB).

An important observation is that polyps may appear in different shades ranging from bright to saturated colors. This is because the source of light always moves along with the camera; therefore, depending on where the polyp is located with respect to the source of light, the polyp may take a different color. This can be seen in the Fig. 3 where the same polyp appears in different shades.

Colonoscopy is an operator dependent procedure wherein human factors such as fatigue and insufficient attentiveness can lead to the miss-detection of polyps during long and back-to-back procedures. The average polyp miss-rate is estimated around 4-12%. Patients with missed polyps may be diagnosed with a late stage colorectal cancer with the survival rate of less than 10%.

What is the solution?

Computer-aided polyp detection may assist colonoscopists with the task of polyp detection and may encourage more attentiveness during procedures. A reliable polyp detection system must handle polyps’ variability in terms of shape, size, color, and texture. Such a system can potentially save lives!